Tony Eastley: It’s not all doom and gloom in the food industry – some companies are bucking the trend. You can still find Australian made goods on the supermarket shelves.
Family run company Heather Brae began in 1941. It sent biscuits to the Australian Diggers overseas and it’s still making biscuits, tarts and shortbread in Melbourne’s northern suburbs. You can hear the factory line behind me.
Bassam Wakim is the company’s managing director. He says, unlike car makers, he doesn’t get government handouts.
Bassam Wakim: Look, it’s very tough and it gets tougher each year. I know of a number of similar biscuit manufacturers that have gone into administration in the last four years, so it is quite tough, but we’ve been fortunate to have good growth. We’ve had 20% growth in the last year.
Tony Eastley: Those people that have gone broke, what happened to them and their workers?

Bassam Wakim: Most of them have been bought out by larger companies and, from what I understand, even they are still struggling a year later.

Tony Eastley: You say you are ahead of the game and you are growing. How do you manage to do that?

Bassam Wakim: We need to be innovative. We’ve got a full time person that just does product development for us. I’ve been in the industry for over 20 years. We’re always looking out for new ideas, new products just to stay ahead.

Tony Eastley: Are you confident about the future?

Bassam Wakim: Yes I am. I have children and I’m confident that one day I could hand all this over to them.

Tony Eastley: Other food manufacturers have gone by the wayside. What lessons have you got for those who are suffering?

Bassam Wakim: We have stuck to our core business, which is biscuit and cookie manufacturing. We haven’t ventured into other areas. We’ve reinvested, we’ve trained our people, but probably most importantly we’ve been able to understand our costings.
These days there’s a lot of criticism of the supermarkets, but if suppliers can’t supply the supermarkets at the price they want they need to walk away. I think a lot of the problems others have had were in supplying products at no, or little profit margin.

Tony Eastley: And in a way you go against the grain of common thought and that is you’re nor exporting.

Bassam Wakim: You are right, currently we are doing little in export. I feel that there are still very good opportunities for us in the Australian domestic marketplace, and that is our main focus. But that isn’t to say we are not trying to do more in the export markets. We are hoping to close off two new export contracts in the next 6 months.

Tony Eastley: The managing director of Heather Brae there. 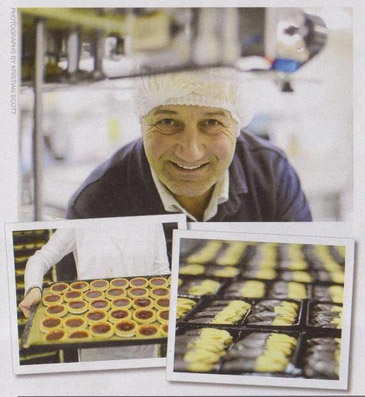 When family-run shortbread business Heather Brae started out in 1941, the company and industry were in a very different place. The company has grown from selling its wares at small general stores and humble milk bars to become a supplier to major supermarkets. There is also a view to begin exporting next year.

Despite such obvious growth, the business is still based in Thomastown, a source of pride for managing director Bassam Wakim.

Now the hard work has been recognised with the Whittlesea Council nominating the company for a Northern Bussiness Achievement Award. Wakim says it is an honour to be nominated for the award.

“We work fairly closely with the council, so they have an understanding of our business, our growth and our philosophy and I think that’s why they selected us,” he says. Wakim purchased the business in 1989 and before took over, the business had only changed hands once. It has always operated as a family business, and Wakim hopes to keep it that way. “I just love being here and growing the business because we’ve got a very good team of staff, and now that my kids are growing up I want to stay here so it’s ready for me to pass onto them.”

For Wakim, the company stands out because of its ethical buying policy.

“I know what we do, we do very well. We care for the environment, we look after our staff, we’re growing the business and we employ local people so all those things put us in a good place to win.”

A number of the company’s 45 staff have been working there for more than 10 years. “We have had a mother and her daughters working together, a couple that got married after they’d worked together, so it’s a happy work culture,” Wakim says.